In the liver parenchyma a hypoechogenic lesion is demarcated in the right liver lobe segment with a max. diameter of approximately 1,8 cm. No major vascularization within this lesion by color-doppler sonography.

An unclear liver lesion is found and CEUS is recommended. What do you see?

After injection of intravenous contrast agent the suspicious lesion shows a moderate and prompt contrast uptake. In the portal venous phase the lesion shows wash-out until the end of the late phase and of the examination.

What is your diagnosis?

Did your diagnosis change?
Enhanced Images 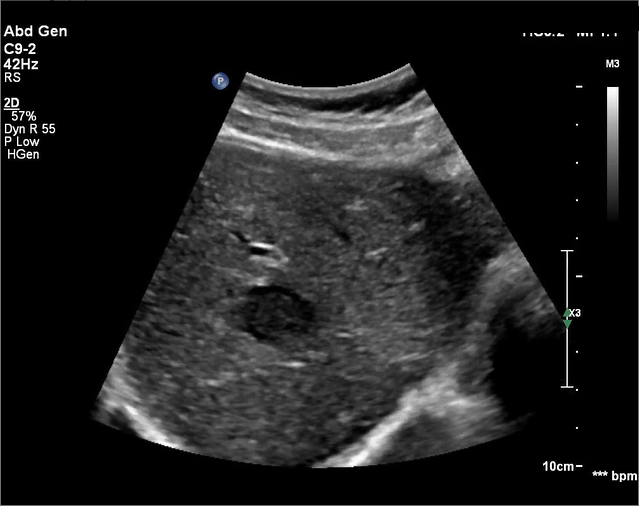 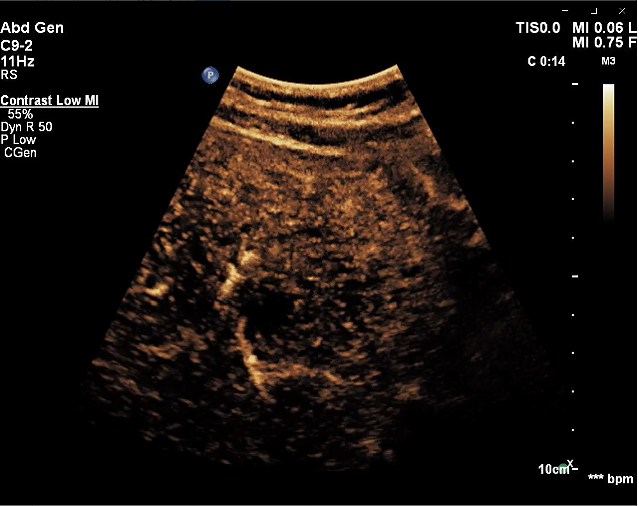 Liver metastases are the most frequent malignancies of the liver. The grayscale sonographic appearance of metastases varies: they can be hypoechoic, hyperechoic, they can present a peripheral halo, and they can have an infiltrative or cystic appearance. On contrast enhanced ultrasound (CEUS), in the arterial phase, liver metastases can be hyperenhancing or hypoenhancing. Liver metastases present wash-out in the portal and late phases, a typical enhancement pattern.

After intravenous ultrasound – contrast administration the lesion shows moderate contrast uptake in comparison to the liver parenchyma . Slight wash-out in the late phase was observed.

Diagnosis: Due to the contrast uptake a haemorrhage renal cyst could be excluded, afterwards the patient underwent biopsy and an oncozytoma was confirmed.

Previous Case 1
Next Case 3 An unclear lesion is found and CEUS is recommended. What do you see?